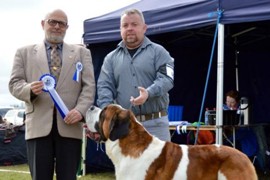 I am a show judge since 1991. I have joined the Dog World since 1974 when I got my first dog, a Pekingese. During the years I have owned various breeds but my constant love remained the Dachshunds.
In 1986 I became the President of Hunedoara County Kennel Club, and also a member in the Romanian Kennel Club’s board. From these positions, I have organized various shows and many other canine competitions.
During 1996-2001, I had the honour of being elected President of the Romanian Kennel Club.
I have been nominated as all-rounder judge in 2005 and, the same year elected as vice-president of Romanian Kennel Club, function I assume until today.
As international judge I had the opportunity to judge in more than 50 countries all over the World.
All this years I had the pleasure and the honour to judge some important events as European, Asian section shows and World Dog Shows and I consider myself the proud inventor of the most well-known Romanian Dog Show … Dracula Golden Trophy.
One of my ambitions was to be able to judge in all F.C.I. official languages to which I can add the Italian and Hungarian.