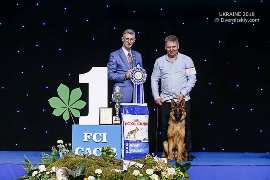 Paul acquired his first dog, a Shetland sheepdog in 1964. In 1968 he was introduced to Lhasa Apsos and has kept them ever since. In 1970 he acquired his first Tibetan Terrier and in 1988 Whippets came into his home. Showing is somewhat curtailed due to judging engagements, but in the past his dogs (kennel Tintavon) have had many top wins including the very first Tibetan Terrier in the world to win an all breeds BIS (Birmingham National, GB in 1974) his double grand daughter was BIS at the Stockholm Int. Show in 1979 and also Top Dog All Breeds in Sweden, Finland and Scandinavia that year. Not to be outdone 9 of his Lhasas have won all breed BIS’s in 6 different countries and many more winning groups and Specialty BIS’s. In 1993 he was awarded the Swedish Kennel Club’s Hamilton Plaque for outstanding breeding of Lhasa Apsos. Tibetan Spaniels were kept in England with Ch’s owned and bred and in Sweden, brown Miniature Poodles were kept for a short time with 2 Int. Champions made up and 2 Champions bred. They are now on their 4th generation of Whippets and they have been very successful when shown. He judged his first Ch. Show in England in 1973. He judged Lhasas at Crufts in 1981 and at that time was the youngest ever to have the honour to judge there. In 1977 he moved to Sweden and now judges under the Swedish Kennel Club. and F.C.I. He has judged in 47 countries on all the Continents, and was appointed FCI All Breeds judge in 1996. Paul is fluent in English and Swedish.