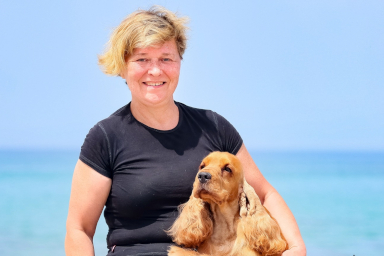 I was born in to a doggy family even not involved in dog breeding or showing my parents had always pure bred dogs. When I was born in our house as a pet was black medium size German Spitz. Being an only child that devoted bitch named Stella was perfect companion for me and my loyal friend in early childhood. When she leave us in old age of 16,5years old my father brought me black Labrador male, totally different dog nature but loved his always happy attitude and as a teenager spent lot of time with him still not even think about shows or anything else but fun time with dog.

My first dog when moved from parents home in my own apartment and finish university was black English Cocker male name Lord, his name later became my kennel name and as he was black I registered kennel ˝Black Lord˝ 1995. ,together with at that time my boy friend and now husband Alexander, my biggest supporter. Without his help would be no shows, no breeding , no judging, even he is personally not interested in showing he loves dog very much. So far in our kennel we breed and show English Cockers and few American Cockers in past with success in show rings all over the Europe. Our kennel produced many International Champions, Group and BIS winners, top winners in many European countries.

I became a dog show judge in November 2016. after more than 20 years of breeding experience and almost 23 years after started show my Cockers. My first licensed breeds were Spaniel breeds and later finished all breeds in FCI VIII . In years to follow I have finished the FCI Group IV and some additional breeds in the group I, VI and IX.

During these short period since I became judge I have judged in Croatia, Sweden, Norway, Denmark, Czech Republic, Austria, Finland and Germany. Thank you very much for giving me honor and opportunity to be judge at your show.