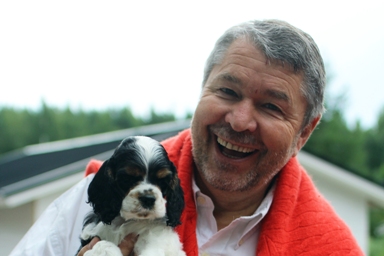 Laurent Pichard bred his first litter under the Vigie prefix when he was 15 years old. This was an Irish Setters litter. He then became devoted to the American cocker Spaniels and never lost his interest in this magnificient breed, finishing over 300 show Champions in over 40 years of breeding. The Very Vigie kennel had a strong influence in the European scene. His biggest and latest win was in Novemebr 2015, when Multi-Ch very Vigie I don’t Know was designated as Eukanuba World Champion in Amsterdam, following the steps  of Multi Ch Very Vigie Vamos à la Playa who was the first Eukanuba World Challenge in Long Beach California in 2007.

Multi CH Very Vigie Huluberlulu was  Reserve BEST IN SHOW over 26000 dogs at The Worldshow in Moskow in 2016.

Laurent Pichard ‘s  Home bred American cockers won many World winners tittles  over the years  and Very Vigie has been elected as Top Breeder (all breeds ) in Finland in 2014.
His breeding activities have also been in English Cockers, Pugs, Maltese and Weimaraners during all these years.

Laurent Pichard started his judging  career in 1978 and was nominated as an FCI  all-breeds judge by the Swiss Kennel Club in May 2010. He has been judging all over European counties, England and has been jjudging at many European or Worldchampionships.

His overseas duties brought him to Australia, USA, Russia, China and South America.
He judges the very famous Breeder Contests in Santa Barbara USA and Best in Show at The Eukanuba Worldchallenge at Cruft’s 2017.