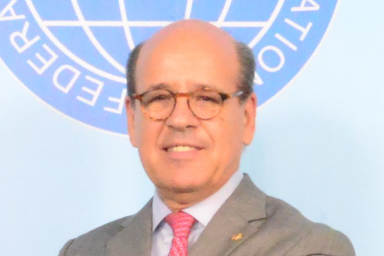 José Homem de Mello, was born in Lisbon, is married and lives in Carnaxide, a small village near Lisbon.
His family always had dogs, so he was born and always lived with them.
He and his wife Teresa always loved dogs, and breed Basset Hounds since 1984 with the “dos Sete Moinhos” affix at their house in Carnaxide where José lives since, he was born.
José’s Basset Hounds are based on European and American lines as he imported several dogs from the United States in the early 80th
During these 38 years, the Bassets bred by him won countless prizes, standing out the following:
– Champions in several countries around the world
– 8 European Winners
-18 World Winners
– 8 times Portugal’s Top Dog of the Year all breeds.
Four of José’s most prestigious prizes were the Best In Show at the 1995 World Show held in Brussels, with “Ch. Humphrey dos Sete Moinhos”, the Collare D’Oro 2001 in Milan and Best In Show at the 2003 Helsinki Winner Show with “Ch. Come and Get Me dos Sete Moinhos” that was also, Top Dog of the Year All Breeds 2003 in Denmark.
A bitch bred by him, Ch. UK May Day dos Sete Moinhos, was very successful in the United Kingdom. She won 24 CC’s, making her the 3rd best bitch ever in the UK, she was top Basset Hound 2007 and Best of Breed at Crufts 2009. His father Ch. Come and Get Me dos Sete Moinhos, which was in the UK for 4 months, was best stud BH in 2006 and 2009 and Sete Moinhos won the award of Basset Hound Breeder of The Year in 2006.
Now he owns 6 Basset’s, and they all live at home, at the ground floor, so they can socialize which, on his opinion, is very important for them.
He has been recognized to award CC’s in Basset-Hound in 1986 and presently he is an International All Round judge.
José is a recognized judge by the Clube Português de Canicultura, Fédération Cynologique Internationale, The Kennel Club, American Kennel Club, Canadian Kennel Club and Australian Kennel Club.
He already judged in Portugal, Argentina, Australia, Austria, Azerbaijan, Belgium, Brazil, Bulgaria, Canada, Check Republic, China, Croatia, Denmark, Ecuador, Estonia, Finland, France, Germany, Greece, Holland, Hungary, India, Indonesia, Ireland, Israel, Italy, Japan, Lithuania, Luxemburg, Monaco, Norway, Peru, Philippines, Poland, Russia, Slovakia, Slovenia, South Africa, Spain, Sweden, Switzerland, Thailand, Taiwan, United Kingdom, Unites States of America, and Zimbabwe.