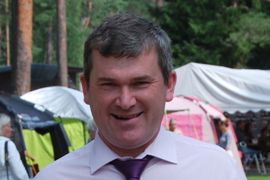 My wife and I started in dogs in 1975. Our first breed was Rough Collies, later to be joined by Bearded Collies, Smooth Collies and Shetland Sheepdogs. Over the years in these breeds we have made up in excess of 20 Champions. Some of our major wins include: In 1997 we had a Male Rough Collie who was the Top Show Dog All Breeds in Ireland with 4 Best in Shows at All Breed Ch. Shows and 11 Group wins In 2004 we won the Dog CC at Crufts with a Shetland Sheepdog Ch. & GB Ch. Brilyn Pick Pocket, he was also a Best in Show winner at Breed and All Breed Int. Shows. We had several other breeds as our four children competed in Junior Handling and I was very much involved in the Irish Junior Handling scene for many years. These breeds included Norwegian Elkhounds, Bernese Mt. Dogs, Greyhound, Afghan Hound, Kerry Blue Terriers, and Yorkshire Terrier. My eldest son breeds and exhibits Great Danes, which when required I handle We have given training classes every week in companion dog obedience, ring craft classes and junior handling for the last 25 years and continue to do so today. Over the last four years we campaigned two Irish Soft Coated Wheaten Terriers to their titles, winning a couple of Groups and CCs in the Uk as well. In 2011 we campaigned two Rough Collies litter brother and sister which we bred, the dog gained his title in 10 shows. His sister will be campaigned in 2012 I became an All Rounder in January 2008, having started to judge in 1979. I have judged in all the Scandinavian Countries and most of the other European Countries as well as Russia ,Israel and Australia. I am President of the Combined Canine All Breed Int. Ch. Show, Chairman of the All Ireland Shetland Sheepdog Club, Treasurer of the Rough Collie Club of Ireland and a Director of the Irish Kennel Club. As a director of the Irish Kennel Club in 2011 I am on the Events committee and the Judges Education. My wife judges All Breeds in Groups 1, 2, 4, 5, 6 and 10 also Best in Show. She has judged in some of the Scandinavian Countries as well as Israel and Australia. She is secretary of the Combined Canine Club and The Rough Collie Club. For the past two years she has been Treasurer of the Irish Kennel Club.