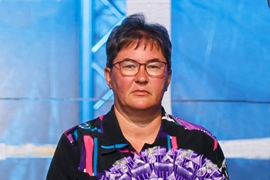 Jadranka Smojver Selimović has always been a Collie person. She got her first Collie in 1979, and has been breeding them since 1984 under the Arsiada prefix. Over the years, she imported dogs from the UK, USA, Sweden, Germany and Czech Republic. During these years she bred numerous Champions worldwide. She is also involved in Boxers, the breed which her husband successfully breeds for more than 20 years.

Jadranka became a Collie judge in 1992, and has since then added a large number of breeds. From November of 2011, she is an FCI all round judge.

She enjoys the process of learning about the various dog breeds and feels that this makes her more competent to make good breeding decisions in her own breed. She judged in Croatia, Slovenia, Serbia, Bosnia and Herzegovina, Monte Negro, Kosovo, Macedonia, Bulgaria, Hungary, Italy, the Netherlands, Belgium, Austria, Sweden, Norway, Finland, Estonia, Latvia, Spain, Germany and judged at the European Dog Show 2007 in Zagreb.